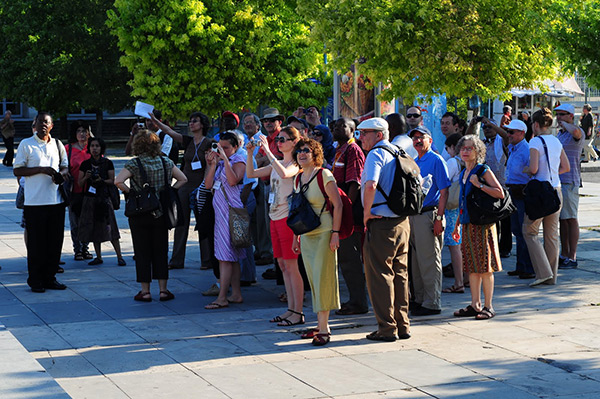 The 2011 ISSRPL, held in Bulgaria, was devoted to the different types of margins that we encounter in our social lives. We looked at people, places, families, ethnicities, religions, and practices–all from the perspective of our received notions of society's centers and its margins. Together we explored issues related to poverty, including its role in the marginalization of certain populations. Through our unique combination of lectures and experiential learning, we learned about the situation of the Roma; Bulgarian Pomaks (ethnic Bulgarians who converted to Islam during the Ottoman period); Catholic and Jewish communities in Plovdiv, Bulgaria; and both traditional and emergent Muslim communities.

"The program successfully made me uncomfortable and made me ‘re-question' myself."
(Fellow, 2011)

Twenty years after the fall of communism, the boundaries of society have entered a state of seemingly permanent flux and reconfiguration, with ethnic and religious groups playing new and important roles in setting social agendas and defining social desiderata. The historical role of the Orthodox Church in the formation of Bulgarian national identity has, for example, taken on a new salience and importance that is playing out in multiple–and highly contested–political forms. Membership in the European Union has also played a critical role in redefining both centers and peripheries, margins and their boundaries.  By approaching the problem of belonging through society's most marginal sectors, we hoped to gain new understandings of the changing nature of politics, religious and ethnic identities, and the terms of civic commitment and belonging.

2011 Local Hosts: Center for the Study of Religion, Sofia University; Department of Ethnology, Plovdiv University; and the Association on Refugees and Migrants.